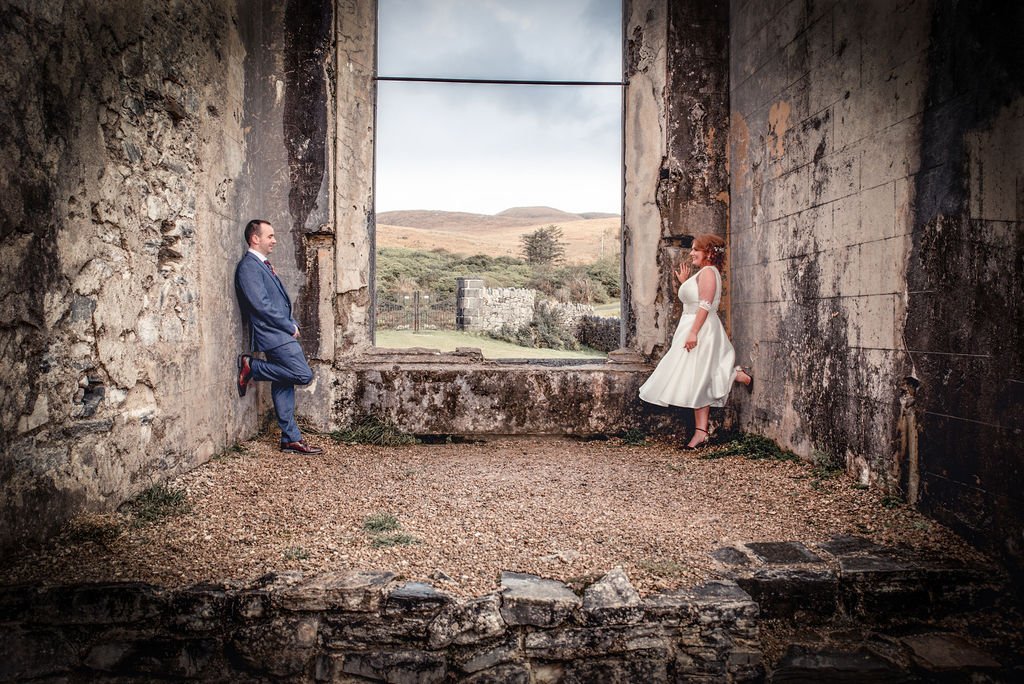 A special ‘Winter Wedding’ to remember

The autumn and winter months of 2020 will likely be remembered as a time of restrictions and seemingly never-ending discussions about lockdowns and variants. For many, it saw the delaying of, or full cancellation, of plans they had previously set. For Elaine and Finbarr, however, they carried on regardless as they joined in holy matrimony amid the tranquil and picturesque surroundings of a crisp winter day in the southwest Donegal region of Annagry.

Elaine (neé Boyle) and Finbarr Sheehy tied the knot and pledged their lives together on Saturday, October 10th of last year in a ceremony that took place at the Caiseláin Óir Hotel.

By following the guidelines that were in place at the time, the attendance figures might have been small, but that didn’t detract from the loving and joyful atmosphere that was created by those who witnessed this most special day.

With an early morning start, Elaine arose from her slumber at around half-past-seven in the morning in the house she had grown up in. With fresh flowers filling a scented aroma in each room and decorations galore spread throughout the house, it’s fair to say that the Bride’s side if the celebrations were certainly ‘wedding ready’ in their anticipation.

Nearby, Finbarr and his entourage were preparing in a slightly different manner, to say the least. He too had an early morning rise and he was soon off to ‘take the plunge’ in a very literal sense of the word. Joined  by two friends, as well as the bride’s brothers and cousin, the lads were off to dunk themselves in the choppy waters of the Atlantic Ocean.

To say the least, it was a brave escapade to start the day’s proceedings.

Weatherwise, there’s an old wive’s tale about leaving the Child of Prague upside down in a bush the night before in the hope that it will bring good weather on the big day. Something must’ve worked well because even though there was the odd spattering of light showers on the day, there was still plenty of sunshine to be enjoyed on the whole.

With her hair, make-up and accessorising complete and dorning her beautiful dress – supplied by Bridal Studio, based in Drogheda – Elaine looked dazzling and was all set for her special day. Having said that, there was still time to observe well known traditions that simply had to be observed. ‘Something old. Something new. Something borrowed. Something blue.’

A new bracelet, bought for her by her mother. A borrowed head-piece from a close friend and quail pen from a lady who was married soon beforehand while the something old and blue was a garter from her auntie; the one that she herself had worn on her wedding day.

Of course, no major spectacle can go ahead without the careful planning and organisational skills that go on behind-the-scenes. By her own admission, Elaine confessed that the original planning stages were “stress free and fun” and she organised the band, the DJ and the guest invitations  which originally compiled a list of over 350 names.

This was all before the onset of the Coronavirus.

Plans for the year of 2020 were thrown into disarray. Although Elaine opted for a virtual hen party over the June bank holiday weekend, she still clung tight to the belief that the imposed restrictions would be lifted in time for her big day. Sadly, this was not to be the case, but even as the numbers dwindled, the date for October 10th was set in stone, no matter what.

The ceremony itself took place in the foyer of the Caiseláin Óir and was conducted by spiritual celebrant, PJ O’Neill. Elaine, a native of Annagry, joined in holy matrimony with Finbarr, originally from Mallow in County Cork, and in front of the allotted 25 guests, they shared their first dance to Westlife’s ‘Holy, My Love.’

On a personal level, Elaine said that the personal highlight of the day was the fact that she got to have her photograph taken it in the presence of all four of her grandparents. Due to the risk of Covid, they had opted not to attend the ceremony itself, but the chance to avail of a photo opportunity was embraced with open arms.

Mind you, the goodwill video messages that came in from Daniel O’Donnell and Brian Kennedy were thoroughly enjoyed too.

Sadly, Elaine’s four brothers were not in attendance. Between them, they work and reside in the likes of Boston, New York City, Dubai and Australia. All was not lost, however, because in a similar fashion to the hen party, Elaine’s brothers could dress up, join in online and enjoy the festivities and celebrate right up until the wee hours.

And a special mention has to go out here to Elaine’s 90-year old grandmother. This lady proved that age is only but a number for she too partied along as well as, if not better, than anyone else. No bother to you, Granny. Keep ‘er lit!

During the build-up, there was the occasional discussion of deferring the wedding until sometime in 2021. Suggestions were made that maybe there would be a relaxation on travel restrictions which would allow Elaine’s brothers to come. Maybe the vaccine rollout would improve her grandparents chances of being there in person too.

Ultimately, with no guarantee of anything like that on the horizon at the time, the decision was made to go ahead with the big day in October. There seemed little point in risking the possibility of organising and then having to re-organise everything again later. The original itinerary for the honeymoon involved a two-week adventure driving across Italy, but that was not to be.

The newlyweds then planned to spend it in the Kingdom county of Kerry; the venue of where the original marriage proposal took place. On 21st September, 2019, it was on a trip to Caherisveen when Finbarr suggested a walk to the nearby Portmagee and Kerry cliffs, where he got done and one knee and the rest, as they say, was history.

Unfortunately, this trip had to be cancelled as well, but nevertheless, this loving couple had already shown themselves to be resolute and more than capable of being able to adapt to constantly changing plans. That’s when they then opted for three nights at the cabu cabins in Cavan; a most wonderfully relaxing setting for these two to share the start of their latest chapter together.

They had come a long way from that night they first met at a silent disco at Whelan’s Bar in Dublin back in the summer of 2018. We’ll leave the last word of this article to Elaine herself as she has an important message for anyone looking to get married during these rather uncertain times.

“After all the stress and build-up, we are so glad to be married and that it’s all behind us. We had a wonderful day. Of course, missing family was a massive factor, but the most important thing was to marry and we’ve done just that. It doesn’t matter if there’s five there, or if it’s five hundred and twenty there; it’s a day for you and that special someone in your life” Elaine told.